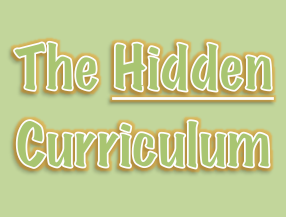 The Role of  Hidden Curriculum in Schooling

Studies have shown that there are three types of curriculum. They are Explicit Curriculum, Null Curriculum and Hidden Curriculum.

Explicit curriculum is the standardized plan which has been taught through centuries and includes plans, objectives, and standards of a lesson.

In this article we are going to take a closer look at the hidden curriculum.

The expression ‘the hidden curriculum’, is a new terminology for today’s education sector. Despite the fact that, the term first came to use after 1960s, the concept had also drawn attention earlier. Hidden curriculum was  revealed long before it was officially named. In the middle of 20th century, a number of scientists noticed that there were other side influences impacting children’s formation, behaviour and the way of perceiving the world. In the scientific articles by John Dewey and George Counts, they discussed the other factors influencing  students’ performance and what in the school curriculum is exactly important in shaping their personality. According to Apple (1979) and Gordon (1982) the term was coined by philip W/ Jackson, while Bennett and LeCompte (1990:188) attribute ‘the invention of the term’ to Friedenberg who ‘used [it] in a conference in the late 60s.The term itself was reportedly coined by Phillip W. Jackson in 1968. In his book “Life in Classrooms” the author describes the other factors influencing student education  outside standardized school curriculum. Through decades, ‘hidden curriculum’ has been analysed from different perspectives and various definitions have been attached to the term, one of which is as following:  ‘Hidden curriculum is intended and unintended consequences of schooling, both official and unofficial settings of learning, and both academic and nonacademic outcomes.’ In addition to that, there are also some modern definitions for this terminology, and one of the typical examples for this includes:  ‘Hidden curriculum is an ideological and political message under the surface of explicit and null curriculum. It helps to communicate ideological messages to the receiver.’

Hidden curriculum is usually observed during primary and secondary school years of education and when teaching process is not understood rightly it may hinder achieving set educational objective implicitly while the school strives for making children better people.  It happens through practises, procedures,relationships, rules and instructors and typical examples could be disciplinary measures, texts, teachers authority, audio visual aids, etc.

Hidden curriculum can be intended or unintended. When we say intended, it is usually messages given purposefully by the teacher, or the ones in power who choose the teacher to pass their ideological, cultural, sometimes political messages. Let us take school books in some countries as an example. In the first page, the picture of president followed by a quote from his speeches is usually given and the textbooks usually contain at least a text informing the students the things he has done for the country which serves the government making children into believing that they have unquestionably the best president and unique policy. The same might be observed about culture, ways of behaving and so on.

Through hidden curriculum children learn norms, behaviour, values etc. which can be both positive and negative depending on the nature of the value they learn and awareness of the teacher.  All of these is learned through different procedures. First of them is through behaviour of a teacher. Let us start by looking at the norms taught by a teacher. If the teacher is mainly dominant, way more strict and never allows the children to show their true inner colours by behaving differently in various stages of learning, this may lead the pupil or student to have lower self-esteem and self-confidence. Thinking they can never choose the things they want, they have to behave always the same way as the other do, may kill their inner passion, talent or any other distinctive feature they have. Teacher approach may also affect the students in positive ways. For instance, if the teacher treats them equally, show respect no matter how old they are, give chance to offer their own point of view and listen to them till the end, children can grow  into adulthood understanding that they are worthy, their opinion matters and so that everyone’s opinion matters and deserve treated respectfully.

Textbooks used during schooling can also have implicit effects in shaping  learners’ view of the world. Let us take gender issues as an example. In many course books, it can be clearly seen that, boys are usually described being physically strong, muscular, tall, agressiv. Their characteristics are also  defined in this kind of story books which propagates that boys can not cry, they have to be good at jumping, shooting and other masculine skills. All these descriptions may have a negative effect on the students who do not possess these features and may end up either being bullied by their peers or being introverted and feeling unworthy. The same goes for girls, as well. However, the ones who suffer most, are neither boys, nor girls, but the ones who are not heterosexual. Children do not acquire this information through their study years which leads to prejudice, their aggressive and sometimes violent attitudes towards the homosexual.

Discrimination can also be observed among school subjects. Thus, Physical Education, Music and Art is not taken seriously and considered not to be important whereas the importance of science is quite often emphasized and children with mathematical skills are thought to be smart. As a result, the students with relatively lower or no ability in science, math are put through continuous criticism by their parents, close relatives, peers and even by the teacher resulting high level of stress and even sometimes committing suicide.

However, hidden curriculum also embodies the other needed behaviours which can help the individual in the future work environments and society how to behave well. In other words, hidden curriculum  can be explicit not hidden when the educator is aware of it and takes advantage of it while teaching process.  When the teacher recognizes the teaching procedure not only as a technical job but also adds her love, passion and tries her/his best to plant the seeds of humanity in children’s heart, it strenghtened learning process and motivates children to learn. Looking at examples, we can see that among implicitly taught values punctuality, respect, meeting deadlines, listening while others talking are the most noteworthy.

Hidden Curriculum and the Need for Critical Pedagogy Salomi Snehalatha