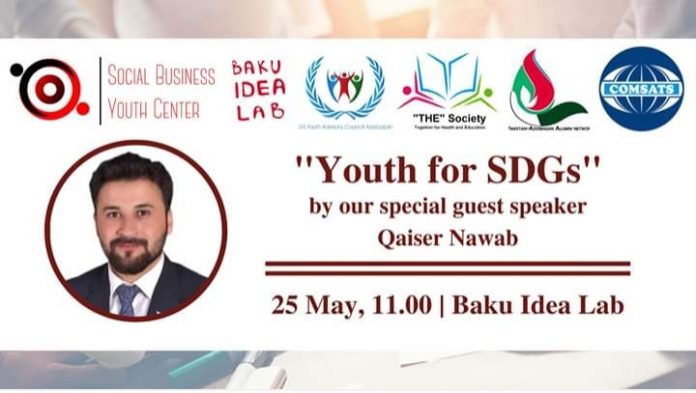 Are you interested in getting know more about Sustainable Development Goals(SDGs) and youth role? Would you like to hear from an experienced youth activist and expert on SDGs about experience of Pakistan in youth participation for implementation of SDGs? Maybe you want to collaborate for joint social projects? Then don’t miss this opportunity to be connected with our honored guest speaker Mr. Qaiser Nawab!

Mr. Qaiser Nawab, a UN’s SDGs Advocate, Socio-Political, Human Rights and Youth Activist is from Pakistan. He received his BS degree in Electrical Power Engineering from COMSATS University, Islamabad, Abbottabad campus on Taleem Fund scholarship and Master in Project Management degree from ShaheedZulfiqar Ali Bhutto Institute of Science and Technology, Islamabad. He is currently serving as Program Officer at Commission on Science and Technology for Sustainable Development in the South(COMSATS) HQ, Islamabad.
He has successfully completed a short course on “Leadership for Engineers and Technical Managers” in January 2014 from Pakistan Engineering Council Islamabad. He was selected as the Cultural Ambassador of Pakistan in U.S. and attended Saginaw Valley State University, Michigan with special focus on American History, Public Speaking, Youth Leadership and International Relations. He represented his Culture in more than 15 states of USA and gained exposure to the diversity of US culture. He attended and represented Pakistan in various International Youth Conferences including International Youth Leadership Conference UAE. He represented his country in the Poetic Heart: “Connecting Humanity 2013” at Dubai Knowledge Village, UAE. He is an active member of National Peace Committee for Interfaith Harmony Government of Pakistan since 2013. He contributed a lot to promote peace in his area.

He got admission on scholarship in a course on “Regenerative Leadership” in UPACE Center for Executive Education, University for Peace, Costa Rica,USA. He participated in the“Preparing Global Leaders’ Summit (PGLS) 2015” in Moscow, Russia.

On account of his valuable social services, contribution to society, leadership skills, he has been awarded thrice “UN Youth Icon Award 2015,2016 and 2017” (Pakistan) on behalf of United Nation on August 12, 2015, 2016 and 2017, (UN International Youth Day). He was awarded “Youth Achiever Award 2016”. He participated in the “MERIT360” conference on UN’s SDGs held on 27th August to 12th September 2016, in United Nation HQ, New York. He has also been affiliated with various renowned think thanks of the country and has successfully completed 10 days summer school at Strategic Studies Institute, Islamabad about “Pakistan’s Foreign and Security Policy”.

Mr. Qaiser Nawab made a history by being elected as the first ever male Deputy Speaker of the Youth Parliament Pakistan from the Opposition party. On the basis of his performance, he was selected by Pakistan Institute of Legislative Development and Transparency –PILDAT as a delegation member of a study tour to UK and Denmark in 2015.

He has been granted the distinction of “Associate Fellow” of The Royal Commonwealth Society, UK for commitment to promoting the values of the Commonwealth and working to improve the lives and prospects of the Commonwealth citizens. In appreciation to tackling UN’s SDGs, he has also been awarded “UK Youth Award 2016” in The House of Lord, London UK in April 2016. In 2016, he was selected for World Youth Conference in Delhi, India, whose theme was “Youth for Sustainable Development”. He participated in “The One Young World Summit 2016” in Ottawa, Canada. He successfully organized various International seminars and awareness walks to celebrate the United Nation’s International days in Pakistan. He organized an International Seminar on “Peace, Trust Building and Sustainable Development in 2016”. He participated in a three days World Youth Summit for Peace 2016, in Islamabad.

In 2017, he attended the International Youth Forum on Human Rights and UN’s Sustainable Development Goals in Nepal as Speaker. He participated in the first United Nations World Data Forum from 15th to 18th January 2017, in Cape Town, South Africa whose objective was to provide a platform for technical discussion of opportunities and challenges in applying information, data and statistics, to measure global progress of the 2030 Agenda for Sustainable Development.
In February 2017, he attended the World Innovation Summit for Education in Madrid, Spain to discuss and debate the future of education. In March 2017, he being a young international expert on higher education had a study visit of Europe that included the visit to Spain, Switzerland, Belgium, Netherland, Luxembourg, Germany, France and UK. During this visit, he represented Pakistan at a one-day event on “Glass Ceiling Effect” at Palais des Nations, Geneva, where he spoke on the role of youth and civil society in overcoming the Glass Ceiling Effect in Pakistan. The glass ceiling is the invisible barrier that prevents women from rising to the highest ranks when pursuing a career. Further, Mr Nawab visited the European Parliament in Brussels to observe its working system. He had a short trip to Amsterdam in Netherland and Paris in France. He visited and participated in the Youth Empowerment Event at Griona University in Spain as well.

Mr Nawab availed one week fully funded study tour of Azerbaijan on account of winning an International Essay competition 2017 and 2018 titled “What do I know about Azerbaijan?” The competition was organized by the Ministry of Youth and Sports of the Republic of Azerbaijan.On his way, he had a short trip to the capital of Qatar, Doha, where he met with the leaders of Pakistani community working and residing there for many decades.

Mr Nawab paid a courtesy visit to Carlton Primary School Dewsbury, England upon the invitation of the school’s administration to observe the primary education system in the UK. Addressing the school kids and staff, he emphasised that school play an important role in the human development ultimately leading to the development of society.
He was invited to İstanbul Şehir University as a speaker at a seminar on “The Role of Youth in Promoting OIC values” in May 2018. He had an excursion trip to famous touristic sites of Bursa and Istanbul in Turkey.
He participated as speaker on “Role of youth in attaining UN’s SDGs”, in the United Nations Conference on Trade and Development (UNCTAD) Youth Forum and World Investment Forum 2018, scheduled from 22-26 October 2018 at Palais des Nations, Geneva, Switzerland. The 2018 theme is Youth Entrepreneurship: A Force Towards Inclusive and Sustainable Growth. The 2018 UNCTAD Youth Forum will feature primarily topics that relate to youth empowerment across entrepreneurship, with a focus on investing in digital youth, youth at the negotiation table, what is on the mind of millennials and how youth can think globally and act locally.

Mr. Nawab was invited to the ECOSOC Youth Forum 2019 as Speaker on “SDGs” held on 8-9 April 2019 at UN HQ New York.
Mr Nawab successfully completed a one month long “Young Politicians’ Fellowship Program (YPFP) 2019”, as a unique opportunity to understand Pakistan’s policy making process and engage with multi-party leadership and young fellows from across the country in intellectual discourse. It is a prestigious programme of training and in-depth learning for young, active and passionate political party workers. The highly competitive fellowship programme was designed to provide a unique opportunity to selected young members, belonging to Pakistan’s political parties represented in the National Assembly, to tackle political challenges and opportunities and effectively contribute to policy reform. The fellowship, through high-level trainings and engagements facilitated the selected fellows to connect, exchange experiences, and receive academic, practitioner and policy training to enrich their knowledge of the field of politics. The YPFP aimed to expose young members of various politics parties to political knowledge and practices both within the parties and other political institutions through dialogues and interaction with some of the most knowledgeable and experienced subject-specialists in Pakistan.

Topics to be discussed:

– What are SDGs?
– The role of youth in SDGs
– Peace and tolerance
– Social Media activism

Participation is FREE. Spots are limited.
for registration: 24th May, 23.30
Registation link: https://forms.gle/uv8GvLRQ4XxsbiTe8